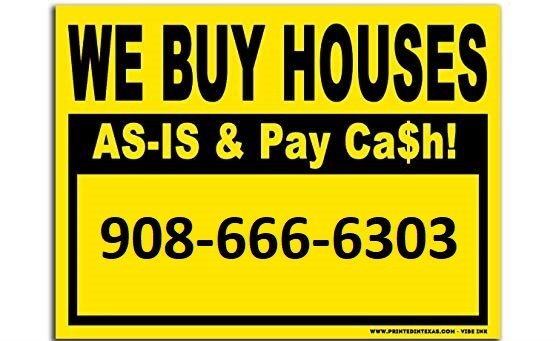 Ever wonder what the “We Buy Houses” signs really mean? You see them all over New Jersey, usually in middle to lower priced neighborhoods, and older transitional areas with a lot of fixers. Often the signs seems homemade and haphazardly placed. The words “fast” and “cash” are on most. If you were to call this sign, would you really receive an offer to close fast, for cash?

Maybe, but probably not.

The signs, called “bandit signs”, are actually a lead generation tool used by real estate wholesalers and flippers. Some of these guys are actually legitimate real estate investors looking for motivated sellers with dumpy homes who want or need to sell fast. Most of the sign placers are “bird dogs”, who find the motivated sellers then turn the deal over to the investor for a finder’s fee.

Either way, the main goal is to make you an offer and get the home under contract at a price that will produce a profit on either a wholesale resell (selling the contract) or a rehab/flip.

What sort of offer will these guys (or gals) make you?
The formula is fairly universal and straight forward. 70% of market value minus repair costs. Market Value, also known in the business as “After Repair Value” (ARV), is the value of the home if it were in retail sales condition and able to sell to a buyer using a conventional mortgage. 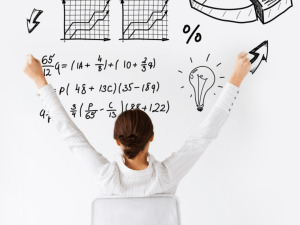 So, let’s say you inherited an old junker in Irvington that would sell for $225,000 in good condition, but it has a bad foundation, bad roof, major plumbing problems, severe neglect and multiple trailer loads of junk to haul out of the rat infested back yard. And let’s say it would cost $100K to bring the home up to par, including the investor’s holding time costs, interest, insurance, utilities, risk factors, etc.

I’m over-simplifying the formula, and there are a lot of other components that go into the “repair costs” part, but this is an accurate “quick and dirty” computation. Also, the terms of the deal will often not be “all cash”, but instead some sort of creative financing. And, these deals are very, very hard to find.

Will this investor make money if he can buy such a house at this price, owner financed? Maybe, maybe not. Many don’t.

Many flippers over-estimate the after repair value and under-estimate the repair costs and time required to complete the project. Add in some bad timing, such as anyone who bought a flipper in Orange in summer 2007, and it can sink the deal pretty fast. If the house ends up only selling for $200K, and the repair costs end up being $125K, the deal won’t be profitable (unless using just the gross numbers like the TV Flip show liars do). But it should be profitable for an experienced, veteran investor who knows how to size up property quickly and knows the resale values in the neighborhood.

If you were the owner of this house is it really a good deal to sell it for what seems like a really, really low price? 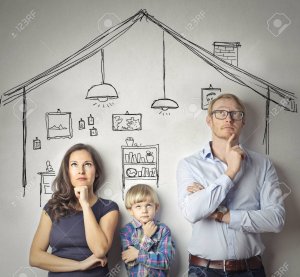 If you just flew in from another state for the weekend, it’s an inherited property owned by a recently deceased relative, you don’t have time to mess with it, and don’t need the money, etc. Then yes, it’s probably not worth your time and effort to fix it up yourself and net a higher price.

You are the investors dream seller, and in this case, it’s probably a win/win, assuming the investor makes a reasonable profit. Also, a happy end-buyer gets a professionally remodeled home, refreshed and ready for move-in.

The neighbors win too, if the home was previously an eyesore. This would be the ideal outcome.

But for most sellers, you can do better to avoid fire-selling your home like this. Many “unsalable” homes can be made salable for less than you’d think, barring chronic mechanical issues such as in my example. There are also some pretty good consumer rehab loan products that allow a buyer to purchase a junker and factor the repairs into the purchase loan, provided a licensed contractor is brought into the deal to spec out the work and manage the remodel.

And not all of these “We Buy Houses” signs are targeted toward junker homes.

Drive out to any starter home neighborhood (Toms River, Jersey City), where first time buyers are upside down on their mortgage, and you’ll see these signs. Often they promise to “save you from foreclosure”, or “get rid of your payments”. If the owner is upside down, then the home is a short sale candidate. The investor may try to get it under contract for a very low price, and run the deal up the flagpole as a short sale.

Months later, when the bank says “no”, the deal is off and the investor moves on.

If there is a small amount of equity, but not enough to cover commissions and costs of a traditional retail sale through MLS, the investor may try to obtain the home through a “mortgage assignment”, which is essentially taking over the payments, then sell it “owner financed” to a new buyer at enough of a higher price to pocket the new buyer’s down payment as profit. Then the new “owner” takes over the original owner’s payments, and the investor moves on.

In almost all cases, the signs seek sellers for whom time or the “situation” is a bigger problem than foregoing top sales price.  I don’t seek out these deals, but we’ve stumbled upon a few over the years, where the seller cared more about timing and hassle avoidance than fetching top dollar.

I’ve bought several of these type of deals, but always only when it made sense for the seller’s circumstance.

Be careful though. I think the “We Buy Houses” signs may create more victims than rescues. That’s because it’s not a regulated business, and you don’t even have to have a real estate license to do it. Nor do you need money. So all the risk is usually on the seller unless actually getting cash at closing.

“Quite often investors are willing to pay cash for a home and with the recent tightening of financial restrictions, coupled with the growing number of complaints about low appraisals, having a cash buyer has become even more appealing.”

Get Your Fair Cash Offer: Start Below!

Sell Your House Fast in